For the most dramatic views, it's best to approach Bamburgh from Budle Bay which is over the hill to the north. This gives you a spectacular first glimpse of the village and castle, with the coastline, sea and Farne Islands behind.

The village is small but attractive and,

despite its popularity, is largely unspoilt. At its heart is a triangular green with trees and there are a handful of shops around it.

The main things to do in Bamburgh are enjoy the lovely sandy beach, find out about Grace Darling at the museum dedicated to her and at the church opposite, and visit the castle which sits on a rocky basalt outcrop at the end of the main street.

Not surprisingly, the stretch of beach next to the castle is the most popular and, as you can see, dogs love it! Less busy spots can be found by walking north past the golf club.

Click on an image to see it in Google Streetview 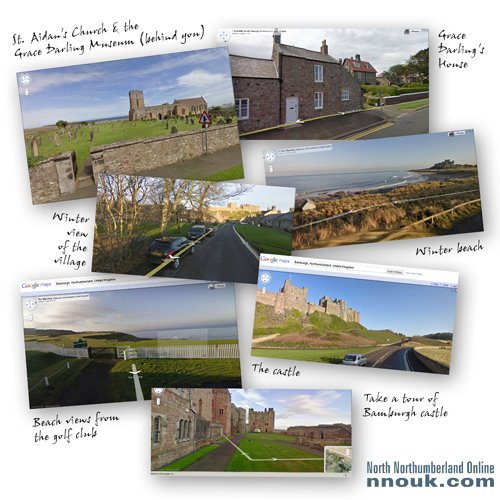 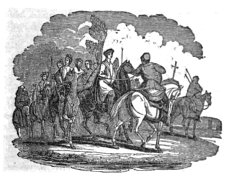 The native Britons had a fort at Bamburgh until the site was captured by the Anglo-Saxons in the year 547. From then until 634 it was the capital of the kingdom of Bernicia, which stretched from the rivers Forth to Tees. However, the core of the current castle dates from the Norman era and the keep was probably built by Henry II.

Henry VI ruled all England (in name) from Bamburgh in 1464, during the Wars of the Roses. But, after a nine-month seige, the castle became the first to be defeated by artillery in England.

Restoration work was carried out from the 18th century onwards and was completed by the Victorian industrialist William Armstrong.

Archaeological excavations in the 1960's turned up a gold plaque known as the Bamburgh Beast and also the Bamburgh Sword which dates from the 7th century. The sword is now on display in the museum at the castle. 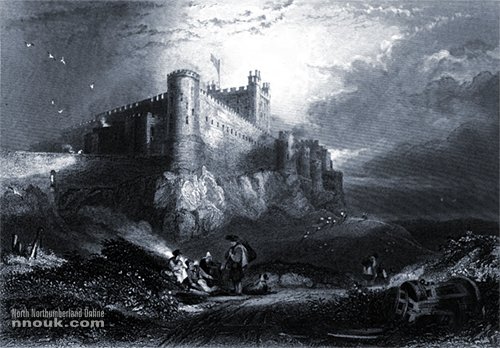 Since 1996, The Bamburgh Research Project has investigated the area, focusing on the castle site in particular. In 2010 they were joined by Time Team for a day. The Channel 4 series has visited Bamburgh several times.

'Loss of the Forfarshire steamer'. The rescue by Grace Darling

An RNLI museum in Bamburgh records the life of lifeboat heroine Grace Darling who was born in Bamburgh in 1815.

Her father was a lighthouse keeper, so Grace spent her youth at the Brownsman and Longstone lighthouses on the Farne Islands. 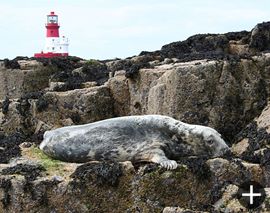 A seal in front of the Longstone lighthouse. Boat trips to the Islands leave from the harbour at Seahouses. © Dave Dunford / CC BY-SA 2.0.

In 1838, she helped rescue survivors from the shipwrecked SS Forfarshire and became famous worldwide because of her heroism. 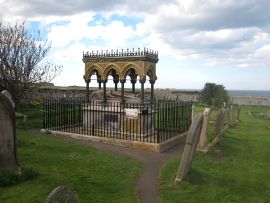 Grace is buried in St. Aidan's churchyard and an elaborate memorial commemorates her. After it became worn due to the brisk Northumbrian sea breezes the sculpture was replaced by a second version in a more hardwearing material. The original can be seen inside the church.

The Grace Darling museum is across the road from the church and the boat used in the rescue is an exhibit. The British Pathe website has a newsreel clip of the arrival of the boat at the museum on the centenary of the rescue in 1938. 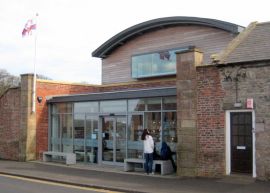 A rarely seen angle on Saint Aidan's Church and the castle at Bamburgh,

The original sculpure from the Grace Darling memorial can be seen inside the church. 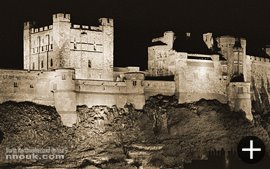 Bamburgh Castle was lit up at night for a period in the late 1980s. These photographs were taken in January 1989.