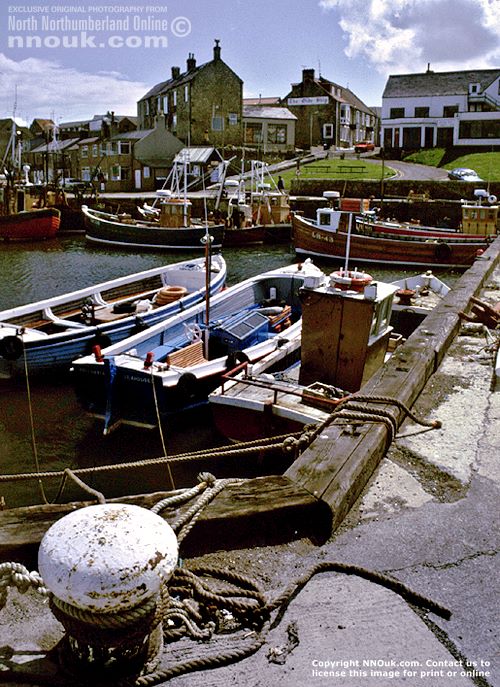 Seahouses is a centre for sailing, diving and fishing and the departure point for boat trips to the Farne Islands. Trips to the Farnes can be booked at the harbour from a range of operators.

Prices don't seem to be on display (October 2015) so it may be an idea to 'phone around several beforehand to get an idea of the average cost.

The Farne Islands lie about two miles off the north-east coast and are one of the most famous sea bird sanctuaries in the British Isles.

An incredible 182 different species of bird were recorded there in 1999.

Guillemots, eider ducks and puffins (55,674 pairs in 2007) are just three that you may see. There is a large colony of grey seals too. 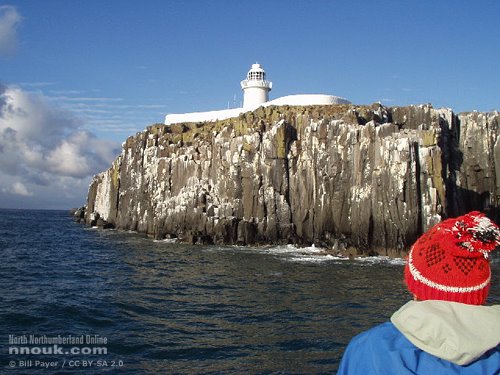 Seahouses has an active RNLI lifeboat which you can visit at the entrance to the harbour. Boards show details of the many rescues that have been carried out in recent decades. 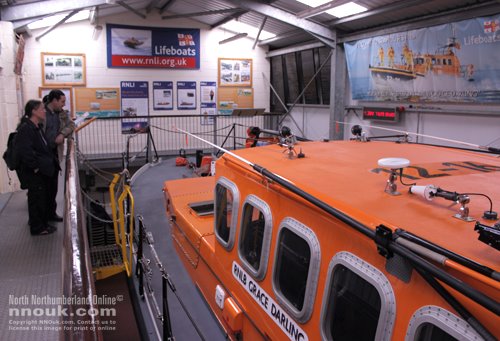 Seahouses is a lively place and welcomes a large number of holiday-makers each year.

There's accommodation of every type: from caravans and camping, to guest houses, bed and breakfast and hotels.

The main street includes gift shops, tea-rooms, an amusement arcade and many food outlets. The dominant business in Seahouses these days is tourism rather than fishing, and it's very visible.

If this isn't to your taste then Seahouses can still be a good choice as a base from which to explore the wider area or perhaps for a holiday out of peak season. 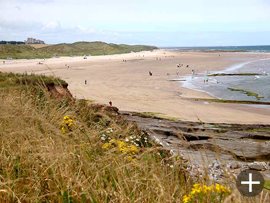 The beach north of Seahouses. Bamburgh castle is in the distance. Photo: © Joan Sykes / BY-SA 2.0.

There's a lovely sandy beach to the north, which gets fairly busy in summer.

The sands run unbroken from Seahouses to Bamburgh — providing an enjoyable walk for the more energetic visitor. 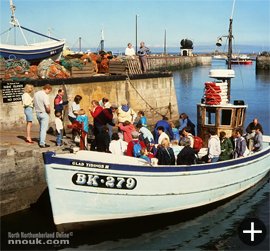 Spring is the best time to visit the Farne Islands.

A walk around Seahouses harbour is one of the highlights of any visit and is traditionally done with a bag of fish and chips. Though watch out for the seagulls! 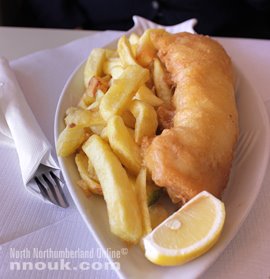 Eating indoors can be quite expensive for what you get, in takeaway/cafe style surroundings. Our advice is to choose somewhere that displays prices outside. Or explore options further afield which may offer better value away from the tourist hotspots.

See a wooden boat under construction in Seahouses harbour, in 1968, in this video on the British Pathe website.

There was also a rail connection to Chathill. The lines closed in 1951. You can find out more at the Northumbrian Railways website.