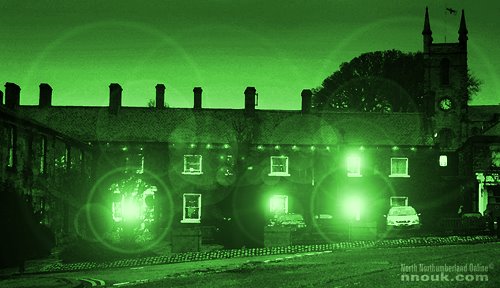 In the late 1980s, a member of staff at the Blue Bell Hotel told me about various unexplained incidents.

One bedroom was particularly problematic, she said. A guest woke up in the middle of the night and could feel someone sitting on the end of the bed, but there was no one there.

Another customer saw a ghostly maid walk through the wall. There had been a doorway there at one time, but it had been bricked up long ago. In the end, the troublesome bedroom was turned into a staff room, so guests wouldn't be disturbed any more.

I was working as a magazine journalist at the time. One night when we went for a meal in the restaurant at the Hotel I took the opportunity to ask the owner about these ghostly happenings.

I said I would like to write an article and asked if I could interview him and some of the staff. At no point during the conversation did he deny that the incidents had happened, but it was clear he didn't want to publicise them. The article didn't go ahead. 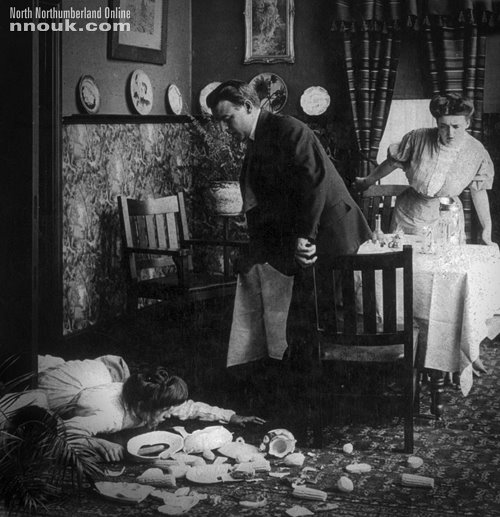 In 2009 I bumped into someone who was a member of staff at the Hotel more recently. Without giving any specific details about what I knew already, I asked had their been any ghostly goings-on in recent years?

'Yes I've seen her several times myself,' was the response. The apparition in question being the ghostly maid once again.

According to this source, the maid tends to appear on the back stairs and throws things if she takes a dislike to you. One member of staff was pelted with lightbulbs.

Other people talk of items falling off the wall in the bar of the Hotel and glasses being thrown.

An elderly resident of Belford died. Several days later he was seen walking on the High Street. Some mistake over dates you might think. But...

The man had lived in a large house on West Street (on the left in the photo above). In the 1980s, the building was turned into the Windy Gyle Outdoor Adventure Centre, which catered to parties of schoolchildren.

One morning, some of the children came down to breakfast and asked who was the old man they had seen standing on the stairs in the middle of the night? Needless to say, the whole place had been locked up securely and no person fitting that description had been on the premises.

Recently the building was converted into townhouses.

The railway station at Belford closed in the late 1960s and the station house was turned into a private home. In 1995, local television news interviewed the then owner who told them about a female ghost which haunts the house.

A woman had an experience with "Victorian doctors" who told her she had a growth in her chest. This saved her life because she went for a check up and the spooky medics were proved right.

With a reputation as one of Britain's most haunted houses, Chillingham Castle boasts a whole range of spooks.

A "blue boy" wails and cries at midnight while a screaming banshee inhabits the coach house. Lady Mary Berkeley's rustling dress can be heard on the stairs of the turret as her ghost passes by. Her spirit is engaged in an endless search for the husband who ran off with her sister.

The year is 1957 and a local newspaper reports on possible poltergeist activity in Embleton.

Patrick Phelan, an ex-RAF man, his wife and their ten children were living in a house that was provided by the Royal Air Force. They had experienced crockery being smashed, bottles of milk thrown against the wall and an old broken grandfather clock that started chiming 13 times.

Footsteps were heard: sometimes those of a woman, other times the heavy tread of a man. Pillows were thrown, electricity was turned off at the mains and furniture turned upside down during the night. They had disconnected the doorbell because it rang persistently and there was repeated knocking on the door.

One morning the family woke up to find they couldn't get into the rear part of the house because a seven-foot plank had been jammed against the door.

"On Tuesday night I was hit in the back of the neck with a loaf of bread and something punched my wife in the eye a few days ago," Mr Phelan told the newspaper.

Two notes had been found telling the family to leave and, as the children played in the garden, they were confronted by a man dressed in Victorian clothes who ordered them out.

The activity was said to have become much worse during the winter months and, at the time of the article, the family was moving out after living there for two years.

RAF officers who were visiting the house to assess any damage before the family left, dashed outside when they heard a crash. In the back garden they found "an ornamental urn lying in small pieces. Beside it was an oval shaped concrete block neatly halved".

Sadly the article doesn't give the address of the house. Though it says it was 56-years-old at the time.

I don't know which newspaper this was published in. I only have the cutting marked with the year.

There have been a number of sightings of big cats in the area. Forestry workers have seen them and one animal jumped over a hedge and landed on the road in front of a startled walker.

My instinct is to be sceptical of anything that I haven't witnessed myself. But, in the case of big cats, I have actually seen one. It happened in June 1986.

I had walked to Cuthbert's Cave on several occasions in the past and this time I decided to take a route that I hadn't tried before.

From Belford I walked along the old A1 to Detchant. Then took the lane to Greymare Farm and from there I followed the footpath.

Soon I found myself in an area that was quite open, but with ridges, small crags and gorse on either side of the path. 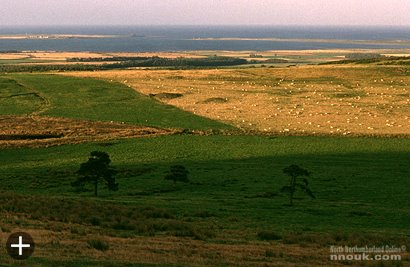 Suddenly, from the right, a large sandy-coloured animal appeared on the path ahead of me. It was long, with thick limbs and had a broad, flat head. A big cat.

Within seconds it had disappeared into the bushes on the other side of the path. Although I had my camera with me on a strap around my neck, the whole thing was over with so quickly that there wasn't time to take a picture.

But also I was shocked and frozen to the spot. To be alone in such an isolated place and see this in front of me.

It could have been a cougar. But the head seemed bigger — more like a lioness, as ridiculous as that might sound.

It wasn't until I began walking forward again that I realised the animal had been slightly further away — and therefore bigger — than I had thought at first. I estimate its body was about five feet long, not including the tail, and 2 1/2 feet tall at the shoulder. It had vanished completely and at the time I was pleased about that!

People have asked was it a deer or a labrador? It certainly wasn't and, anyway, I doubt a dog would have disappeared without a trace in that way.

I continued on to Cuthbert's Cave, where I took some photographs.

Later I was told about the legend of 'the brownie' or 'dunnie'. A shapeshifting sprite that, according to folklore, lives near Hazelrigg — less than two miles away from where I saw this animal.

From Notes on the Folk-lore of the Northern Counties of England and the Borders by William Henderson and published in 1866:

"I have lately heard, from a clerical friend, of a strange Northumbrian sprite, who had been entirely passed over in any accounts of Northern folk-lore to which I have had access. This sprite is called the Dunnie; he appears to be of the Brownie type, and is located at Haselrigg, in the parish of Chatton, in Northumberland. Like others of his race, he is much addicted to mischievous, troublesome tricks, such as the following, in which he frequently indulges.

"When the midwife is wanted in a farmer's family, and the master goes out to saddle his horse that he may fetch her, the Dunnie will take its form. The false creature carries him safely, receives the midwife also on his back behind the farmer; but on their return, in the muddiest part of the road, he will suddenly vanish, and leave the unhappy pair floundering in the mud."